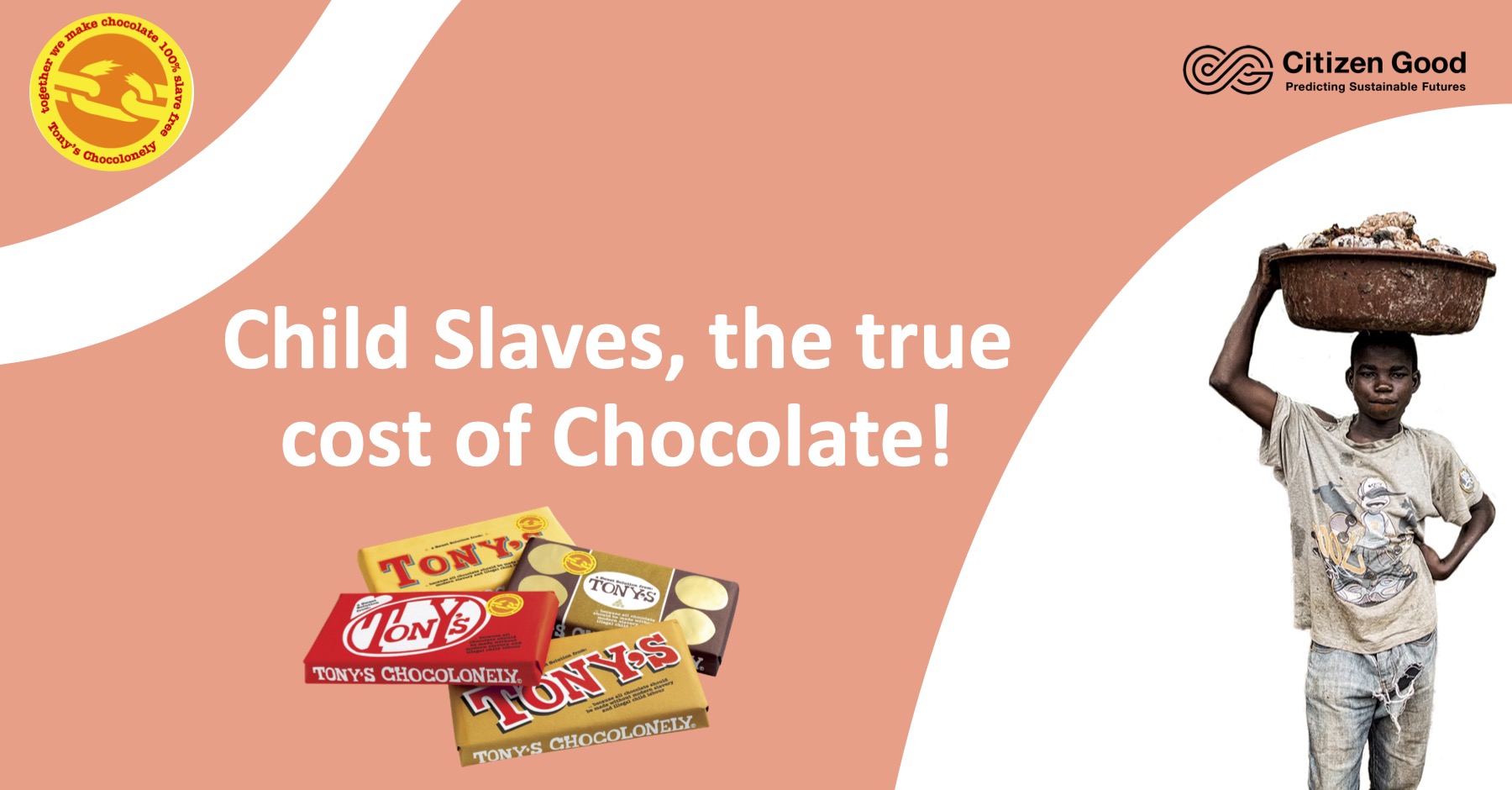 What is the human cost of production?  Are we aware of, and are we happy with the true cost of the products we consume?

Tony’s Chocolonely (a Dutch chocolate company) recently came under fire after it was removed from a list of ethical chocolate companies due to its ties with ‘Big Cocoa’. Big cocoa production is dominated by 2 major players accounting for around 60% of the world’s cocoa sourcing and processing. Their supply chains have child slavery built into their systems. Child slaves, some as young as five, are used to cut down cocoa bean pods and clear forests with chainsaws. Tony’s prides itself on producing 100% slave-free chocolate. They source all their own cocoa but use big production companies in West Africa to process their beans. This is where the problem lies.

As a result of using production companies to make their chocolate, Tony’s benefits from the economic advantage of slave labour (albeit indirectly).

Until Tony’s Chocolonely shone a light on ‘slavery chocolate’, we were not aware of how common child slavery is in the chocolate supply chain. Worrying still, is the fact that child slavery appears to be an acceptable price of doing business in Chocolate. The Chocolonely name comes from being the only, lonely player in the chocolate industry standing up to abolish slavery from their supply chain by buying their cocoa directly from source with clearly traceable beans.

These human costs are rarely shared with consumers. Instead, we are sold on the ‘benefits’ and the great taste of a product but clearly, that’s only half the story. If we knew the real cost of getting some products to market, would the ‘benefit’ really outweigh the cost? How would we feel if a brand slogan sold us the more accurate story:

As chocolate consumers, our purchases from the big chocolate brands condones child slavery and reinforces it as an acceptable practice, but do we really support Child Slavery? Of course not …not as consumers, not as brand managers, not as individuals working within big corporate enterprises. So, what’s the problem?

We have system inertia. We have built and bought into systems that serve us. What would happen if we changed these practises? The uncertainty means we do nothing and stick to what we know even if it means accepting child slave labour as a part of the product we consume.

Changing an established system is hard. When a company like Tony’s Chocolonely comes along and openly participates in solving the problem, linking its proposition and communications to the full benefit story and amplifying awareness of the human cost of production, we should throw our full support behind them, not remove them from lists. Tony’s Chocolonely is one of a new breed of companies choosing to first, participate in solving the problem and then communicating their action.

Tony’s has been exceptionally transparent about their supply chain and have invited the big chocolate conglomerates to review and be inspired by their 5 sourcing principles called Sweet Solution. It is proof of concept in the cocoa industry, demonstrating that slave-free chocolate sourcing is scalable and commercially viable.

They have written an open letter to others in the industry, “Dear Big Choc, we copied you, now please copy”. A proactive step towards the higher ambition of 100% slave free as the norm in the chocolate industry can only be seen as a benefit to all.

Check out the Bitter Chocolate episode of the documentary series Rotten on Netflix to learn more about the uncomfortable truths that exist within the chocolate supply chain.

TEDx – Raising the Bar: A world without any slavery in chocolate 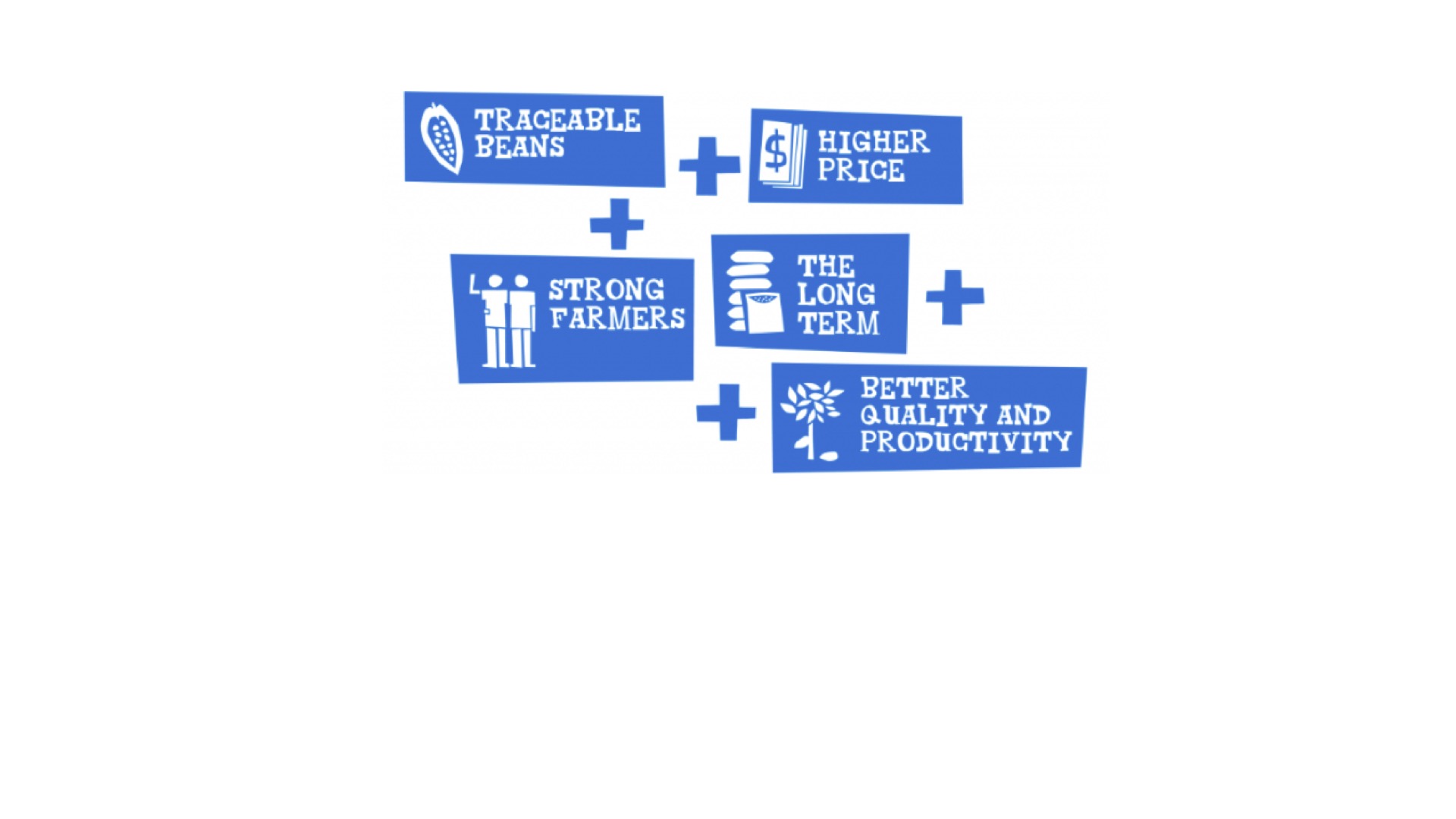