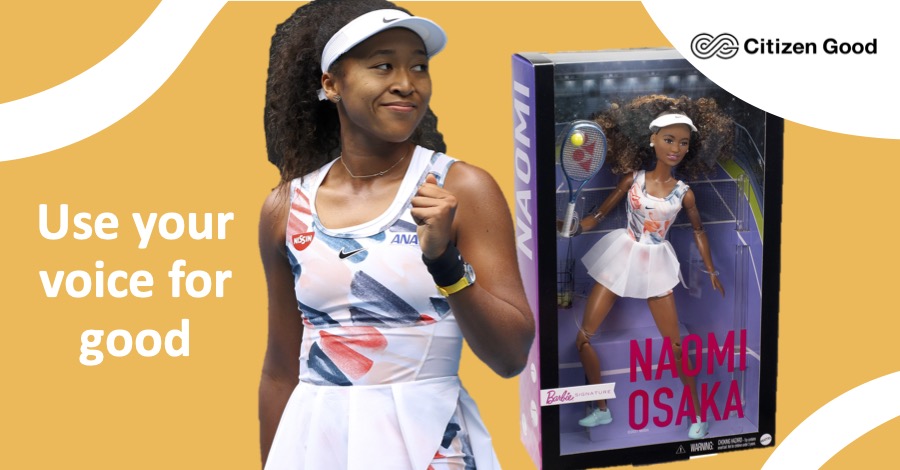 Do you remember where & what you were doing at 22? In the docuseries on Netflix, the tennis player Naomi Osaka asked her mum, “Did you think by the time I was 22, I would have done more?” As if being the first Japanese player in history to win a Grand Slam at the U.S. Open in 2018 wasn’t enough? Then she went on to win another Grand Slam tournament (the Australian Open) and reached #1 in the Women’s Tennis Association rankings. By 2021, she already won her fourth career Grand Slam title, and she’s using her platform to speak out about issues surrounding human rights and racial injustice. And of course, firing up the Olympics cauldron is another fresh milestone for her. It’s no wonder that Mattel created a Barbie® Role Models Doll in Osaka’s likeness and it was sold out in hours.

Athletes personify values such as respect, resilience, discipline, humility, fairness, that parents hope to instill in their children. Osaka was targeted with racial backlash for her decision to represent Japan in the Tokyo Olympics. We witnessed how Lewis Hamilton, Marcus Rashford, Jadon Sancho, Bukayo Saka were subjected to racial abuse in the sporting arena. National brands like BT came out to support the football players as did rival brands like McLaren for Hamilton.

On a politically charged front, Ben & Jerry’s has made a strong statement by announcing that it would no longer sell its products in Jewish settlements located in the Israeli-occupied West Bank and contested East Jerusalem. Unilever bought Ben & Jerry’s back in 2000 and the Prime Minister of Israel has put through a call to Alan Jope in light of the business decision. A Unilever spokeswoman said the company recognises the brand’s right to take decisions about its social mission but declined to comment.

As brands decide how they show up and on which side of history, we found this framework to be a useful in that decision-making process:

With 70% of Gen Z preferring brands they consider ethical, companies need to incorporate social justice into their initiatives as business-critical. Through our Sustainability Demand Matrix™, we aggregate the data from citizens, investors, corporate and brand worlds, to identify the risks & opportunities, as well as the authenticity and relevance for a brand to own that voice.

One of our favourite quotes is from Jochen Zeitz, CEO Harley-Davidson, “Sustainability is no longer about doing less harm. It’s about doing more good.”

And that good is infinite indeed.